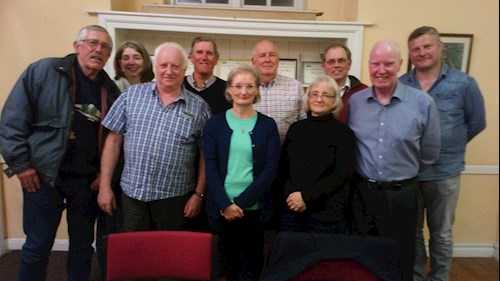 I was voted in as Chairman of the Parish Council in May 2018 having served a 6 year apprenticeship as Vice Chairman. My background is as a businessman having run businesses large and small both within the UK and New Zealand.

I have also held a number of local voluntary positions including the Community Health Council, Business Forum Mid Devon (Chairman), NSC Revels Chairman for 2014 and 2016 and past Editor of the Newton Wonder.

I enjoy golf at Crediton where I am presently both Chairman and Senior`s Captain.

My wife, Jackie, is Chair of Governors for the Exe Valley Schools Federation and we are both enjoying living in Newton St Cyres having moved here in 2006. Our daughter, Kim, husband Andrew and our two grandchildren, James and Olie (both enjoying Queen Elizabeth School in Crediton) live next door!!

My wife and I first moved to Newton in 2006 with my daughter and granddaughter (who attended the primary school and QE Crediton).  A retired management consultant I specialised in facility management and process improvement and was lucky to work in many parts of the world, including the USA and Africa.

I am a returning parish councillor and now actively volunteer and campaign to improve rural housing (Trustee of the Devon branch of Campaign to Protect Rural England) and rural communications, (a founder member of B4RDS, Broadband for Rural Devon & Somerset,  I brought the local social platform Nextdoor to the UK and set up a 4g mobile network in the village with Vodafone.  Other local works include setting up the NSC Community Resilience framework, the new village sign and logo and the 2016 Parish Plan.  Am an active member of many local organisations and in the last few years have also completed the financing and building of two new footpaths in neighbouring parishes.

I feel that Newton St Cyres is a friendly and dynamic village that punches well above its weight and wish to contribute to it's continuing future success.

I was born in Kent in 1970 on the day Chelsea beat Leeds Utd in the FA Cup Final Replay and moved to South Wales a year later where I grew up. On leaving school I became an apprentice fitter and turner and later went to the University of Reading where I studied mechanical engineering. Post degree, I lived in Worcestershire where my now grown up son Daniel was born before moving to Cornwall where I taught mechanical engineering at Cornwall College. I relocated back to South Wales to return to the engineering industry and worked on many contracts throughout the UK within the heavy industry sector. In 2009 I moved to Devon to work for Centrax in Newton Abbot where I have remained since and I am their Health, Safety and Environment Manager.

In 2013 I met my wonderful partner Jacquie and in 2016 I moved into the village to live with her and her daughter Poppy. I very much enjoy living in the village and love to walk, run and cycle around the beautiful surrounding countryside. My hobbies include cooking, gardening and running and I have completed several ½ and full marathons for various charities.

My husband and I have lived in Newton St Cyres since 2003, moving here from the South East. Although not Devon born-and-bred, we both appreciate living in such lovely countryside. I was born in Luton, but grew up in the Vale of the White horse in Berkshire and in Hertfordshire. After studying Biology at Birmingham University, I completed a phD at Leeds University, where I met my husband. As well as bringing up two sons, I worked have worked as a research scientist in the Pharmaceutical industry and as a science teacher. I retired from teaching in 2015.

Since retiring I have enjoyed taking an active part in the local community, particularly as a parish councillor.

I am married with 3 children and 2 grandchildren. I went to Newton St Cyres Primary School, Shelley School and East Devon Technical College, Tiverton where I studied Engineering/welding. I worked in Crediton  for 30 years at the Milk Marketing Board/Dairy Products Transport/Gregory`s.  I have also completed 25 years in the Fire Brigade as a retained fire fighter.  I worked in the Exeter area for 15 years in Devon Arc and White Horse Motors.  I retired at age 60 and brought Lilly farm 35 years ago.  I am Footpath Warden for Newton St Cyres Parish.  My interests are starting up the Boniface Trail and my hobbies are following Exeter City football, Gardening and walking

I am married to John Quicke, a local farmer and land owner. I qualified as a SRN in 1981, and worked in hospitals and as a Practice Nurse. I have lived in Newton St Cyres since 1986 and have two grown up children. I was on the Revels Committee for a time and also worked with a charity for some years taking people requiring 24 hour care on holiday. My interests include gardening.

I moved to Exeter from Surrey around 1980 after visiting the south west many times before.  Five years ago I moved to Half Moon to be with my partner Cherrie , and to enjoy retirement , although there hasn't been much sitting around with the feet up yet! My interests include music and motorcycling.  I am hoping to be an active member of the Parish Council and to help people when I can .

I have lived in Woodlands in Newton St Cyres since 2004 and prior to that for most of my life I have lived in Crediton.  I have been a solicitors in Crediton since the late 1990s.    I am Chairman of the Boniface Trail Association.  I am a active member of the Rotary Club of Crediton.   My main hobby is music and I also enjoy cooking, gardening and skiing.  I very much enjoy living in Newton St Cyres and I think this is a very friendly Parish with many fine things to offer.

Councillor register of interest forms can be viewed at the link below:

Parish Council Surgery is held in conjunction with Saturday coffee mornings in the Parish Hall - usually the 1st Saturday in each month.

Come along and talk to the Councillor present