Washfield Social Club will reopen on Tuesday 18th May 2021, in line with current Covid -19 restrictions.  All residents of the village and visitors (who must be signed in) are welcome.

It was first opened on August 24th 1990 and provides an opportunity for the residents of Washfield and visitors to meet, socialise and, of course, enjoy the fine beers, wine, spirits etc and soft drinks which are available at extremely competitive prices.  There is also the opportunity to play cards, scrabble and other board games and there is a TV which has proved popular during England football tournaments despite our nation's usual brief participation!

The Club is run by an elected committee who all give their time freely as do the bar staff who are all residents of the village who volunteer on a rota basis.  Any resident of Washfield (over 18 years old) is very welcome to join the committee or go on the bar rota.  It is a real opportunity for you to be part of the community and influence the future development of the club.

The Club also organises a number of events throughout the year.  Some of the events from previous years include: scarecrow festival, quizzes, a pumpkin growing competition and evening celebration, a New Year's eve party, skittles competitions, Eurovision fun evening, treasure hunts and BBQs.

Membership of the Club is only £5.00 a year, payable on 1st December, so come along on Tuesday to your Club at the heart of our community.

Washfield Social Club is now on Facebook, follow us there and keep up to date with club events.

For details of all events also see the village notice boards and join the 'Humans of Washfield & Lower Washfield' and Social Club Facebook groups.

Monday 6th May: May Day Party on the Green.

SCARECROW WINNERS - click here for images of all 2018 scarecrows.

Made by Children
1st - Humpty Dumpty (2) Tilly, Gilbert and Jack Herniman
All 6 in this class gained a certificate.

Winners of the Car Treasure Hunt were:

7th May: May Day Party on the Green.

Many thanks to all those who entered and a very special thank you to Bill and Angela Bolt for the difficult task of judging!

17th June: 'Great Get Together' picnic by the river at Spillifords.

June 3rd Car Treasure Hunt.  Another successful afternoon in the sunshine driving around lanes not often visited and enjoying a cream tea back at the hall!

A £94 profit was made to be split between the Hall and Social Club funds and £55 was raised for the Syrian refugee family by the stalls selling cakes, toys, plants etc.

May Day Party on the Green.  A happy afternoon with Maypole Dancing, Morris Dancers, games and a BBQ.  We were very lucky with the weather - the storms went all round us!  For more information and pictures see our Facebook page.

Congratulations to this year's prize pumpkin growers.  The results confirmed on weigh-in night on 29th October are:

The successful evening raised £145 for ELF.

There was a fantastic festival of froggy fun and frolics at Washfield village Hall on the evening of Saturday 1st October as Washfield residents enjoyed an evening of highly competitive and entertaining frog races. But there was also a serious purpose to the evening as all proceeds went to two very worthy charities Save the Children and Medicins sans Frontieres (Doctors without Borders).​

After six highly contested heats with frog ‘jockeys’ cheered on by friends and family we came to the final all winners race. This pitched the six winners  of the heats against each other and after a close run contest Chas Walton was declared champion of champions and awarded a fine Froggy Trophy to adorn his mantelpiece.

Thanks must be given to a very dedicated team who organised such a successful and enjoyable event. And thanks also to our race sponsors, local businesses and residents of Washfield who managed to raise the magnificent sum of £2000 for our two nominated charities. Well done Washfield.

Catch up with the exciting action here.

Washfield's Summer of Sunflower Growing came to a head on Saturday 17th September when the official measuring took place!  The event was marked by a children's Treasure Hunt walk ending at Spillafords where Adam and Frannie hosted a tea party with guided tours of their new house.  A very enjoyable afternoon.

Thanks to everyone who entered.  There were 11 entries for the sunflower competition and it was won by Anne Moore with the great height of 3.60 metres!  Others were 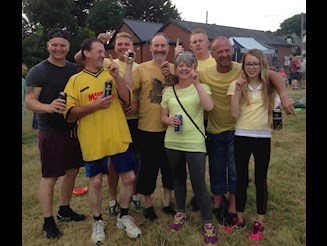 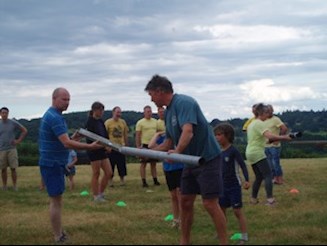 Teams from Calverleigh, Rackenford, Templeton, and Withleigh joined the blues of Washfield for an afternoon of madcap sports at the Knock-out Olympics. The contestants balanced golf balls in gutter pipes, bounced on space hoppers, jumped in dumpy sacks, shot polished pucks, memorised numbers, and hurled wet sponges at each other. For their friends and families, there was a chance to toss balls into buckets to boost their village's score.

The sun shone, the barbecue roared, and adrenalin-fuelled village competitiveness dissolved into good-natured neighbourly banter. The afternoon ended – as all good afternoons do – with a water fight. The children of the Exe Valley skipped home wet and elated.

Our thanks go to everyone who helped assemble the teams, organise the games, stoke the barbecue, run the bar, and attend the wounded. A special note of thanks goes to Denise Wood for the loan of her field.

The success of the evening was down to the teamwork of a large number of local residents.  An enthusiastic group set up and decorated the Hall and cleared up afterwards. In addition, there were cooks, servers, raffle organisers and, of course, band members who all worked together to produce a wonderful evening's entertainment for the people of Washfield.

Thanks should be recorded to all those who contributed to a very successful event.